The ABC’s of Apple Pay & Me

Launched on October 20, 2014, Apple Pay has effected positive changes with large retail chains. But as a smaller retailer, is Apple Pay something you should offer to your customers?

What is Apple Pay and how does it work?

Apple Pay is the iPhone maker’s segway into mobile payments.
Launched alongside the iPhone 6 and iPhone 6 Plus, Apple Pay aims to make the payment process a fun experience for customers. It uses two hardware elements built into the iPhone 6 units, the NFC chip and Touch ID (the fingerprint scanner), to complete the payment process taking place in brick-and-mortar stores—if that store is equipped with a contact-free POS system.

Apple Pay can also be used to make online purchases: once set up, it offers a convenient checkout experience for customers using an iPhone 6, iPad Air 2, or iPad mini 3. One of its key selling points is the ease of use. While in that store’s app, users can check out with a single touch by selecting Apple Pay and placing their finger on the Touch ID.

What options do small retailers have?

Merchants don’t need to be registered Apple Pay partners to accept payments via the iPhone 6. A successful Apple Pay transaction needs to satisfy two conditions on the merchant’s side:

What does Apple Pay mean for small businesses?

It’s too early to project the adoption of Apple Pay among consumers or merchants. Apple Pay is limited to iPhone 6 users at its current stage. Over the next couple of years, business owners will need to decide whether they want to limit how customers pay in store and whether they’re prepared to potentially lose business if they reject Apple Pay.

As Apple Pay builds upon an existing technology, it will most likely be adopted by small businesses. Saying yes to something that makes spending fun without reducing profits is lucrative, to say the least. In addition, the industry predicts that two in every three phones will be NFC-enabled by 2018, thus adding to the likelihood that customers will use their phone to pay for goods and services. 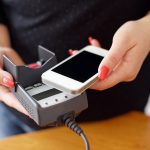 What Does Apple Pay Mean for Small Businesses?Apple Pay